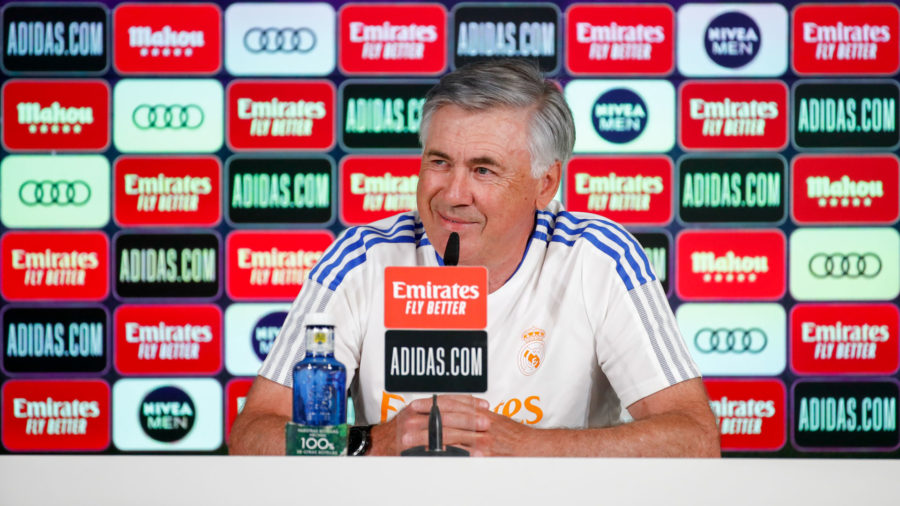 Real Madrid boss Carlo Ancelotti spoke at a virtual press conference ahead of the opening LaLiga match against Alavés (Saturday, 10pm CEST): “We’ve made a good start and shown a great attitude. We’ve been training hard and the players are committed. We’re ready for the start of the season, which is going to be really important for us. All competitions are important for Real Madrid and we’re going to do our best to win the league”.

“It’s going to be a really competitive league season, they are a lot of strong teams and we’re going to battle to win it. The Spanish league is always really competitive and I like that. There are great teams like Barcelona, Atletico and Sevilla. The competition has very specific characteristics in terms of the way you have to play and it’ll be important for us to win it”.

The squad
“It’s not impossible to win the Champions League. Other teams have made big signings and it’s a tough transfer market. But we have a strong squad with strength in depth. This squad can compete with any team in the world. If I as manager can get the players to be at 100% then I’m sure we can compete with every team. The window closes on 31 August and I can’t confirm what the final squad will be just yet. We’ll see what happens, but I’m impressed by the squad”.

Pre-season
“We’ve had a good look at the players and we’ve had a good pre-season. The players have done well and have done a good combination of fitness and tactical work. We’re welcoming back important players like Carvajal and Mendy.  We’ve had a slight problem with Marcelo, who should recover soon. But the general fitness level is good at the moment”.

Non registration of Ødegaard and Vallejo
“It’s not a technical issue with Ødegaard and Vallejo. It’s just the current situation because we can’t register everyone. This might change tomorrow. We have until 2 September for the final squad list. Ødegaard has done well. I’ve spoken to him and told him that the midfield area has a lot of competition because we have eight important players. I could only chose two and I’ve chosen Bale and Jović. But it’s temporary”.

Bale
“He’s a great player. Perhaps he hasn’t been at his best at times, but I’ve been impressed with what I’ve seen, he’s trained every day. If he does well on the pitch he’ll be in the team, but if he doesn’t someone else will be. There’s competition for every position and this is good as it provides motivation. He’s done well this first month, but we’ll see how he does on the pitch”.

Isco
“He’s also started well. He’s committed, shown desire and is ready to play. I can’t make a comparison with recent years because I haven’t been here. But from what I’ve seen, Isco can compete to play in every game. The young players will be ready because I’m going to need them too. We’ve been training well with Castilla and I speak to Raúl every day about how they’re progressing. I was surprised by how many talented young players there are”.

“Hazard has started well and has been training individually. He started with the group ten days ago. He’s in good condition and is ready to play. He’s an important player for us and I’m sure we’ll see the best of him”.

Scoring goals
“It’s a problem we have to fix. Benzema scored a lot of goals last season. We’re working on this collectively and we’re trying to implement attacking football to create more chances. Players like Vinicius, Rodrygo, and Jović can help us to create more chances to score more goals”.

Miguel Gutiérrez
“Miguel Gutiérrez is a very talented player and he’s produced some good performances. He has what it takes to play for Real Madrid”.

Mbappé
“I don’t like to speak about players who aren’t here. I just want to speak about my players. I really like this squad because it has a good mix of experience and youth, and they’re really up for it. I’ve discovered interesting players like Arribas, Blanco, Miguel, Marvin and Chust“.

“But the veterans are the same familiar faces. Modrić has shown great desire from the start; Casemiro has improved a lot since I was last here; Kroos, although he has a slight injury; and Benzema. But I don’t think it’s right to talk about players who aren’t here because I’m impressed with the players I have. It’s an honour to watch them train. I still have a good relationship with the PSG president and that’s about it”.

Messi
“I was really surprised by his departure because he was at Barcelona since he was a kid. But I’m not surprised that a player has changed club. I have total respect for the decision taken by Messi and Barcelona. We have to compete with Barça because they’re one of the best teams in the world. That won’t change without Messi – we still have to beat them”.