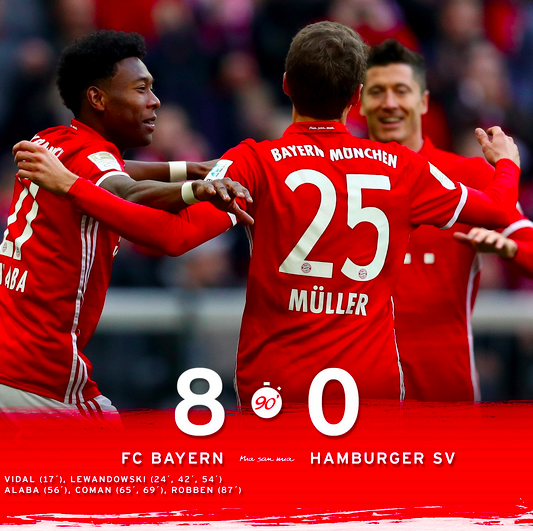 It’s difficult to imagine a better script to commemorate the 1000 matches of Carlo Ancelotti as a coach. Everything was perfect, everybody was with the Italian coach who deserved to enjoy the occasion. With all the crowd of the Allianz with their coach, Karl-Heinz Rummenigge was in charge of the tribute to Ancelotti prior to the starting whistle against Hamburg. The emotional tribute to millenial Ancelotti opened space for the players to come in , players who also had something prepared for Carlo as they gave a bulky win to their coach. Since they stepped into the pitch they made clear they were going to give everything for their coach, and Hamburg suffered it. 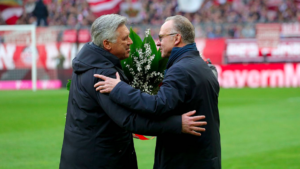 With a vigorous and convincing football Bayern started the afternoon of the 1.000 with a goal by Arturo Vidal in front of the box, a win that also enjoyed a Hat Trick by Lewandowski (24′, 42′, 54′) that untied the party. Alaba, Coman in two occasions and finally Robben were in charge of ending a marvelous match (8-0).

Ancelotti recorded his 1000 games with a great thrashing as a coach and he was thankful: “A perfect day, a perfect match. The team has played very well and I’m very happy!” The Italian coach couldn’t hide his satisfaction after seeing how his pupils played in a match that let them remain on top of the Bundesliga, a title that millenial Ancelotti is very eager to conquer.