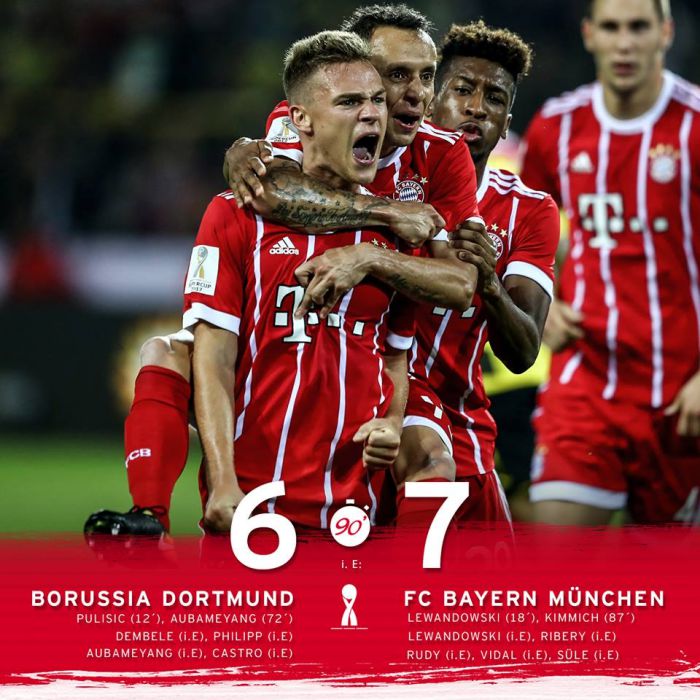 Bayern won Borussia Dortmund on penalties and conquered the 2017 German Supercup, the second in a row since Carlo Ancelotti took charge of the team.

Bayern and Borussia faced each other at the Singal Induna Park in the first test of the season. The tie didn’t dissapoint. Emotion, passion, goals and the lottery of the penalty shoot-out as a factor to decide the Champion.

The locals took the lead early in the game with a goal from Pulsic. The setback did not disarm the Bavarians that played really good in the first half. Minutes later Lewandowski equalised the game but Dortmund’s keeper performance denied Ancelotti’s men to kill the game.

In the second half, much the same, Bayern continued to dominate the game, although Dortmund went ahead again thanks to Aubameyang. However, Ancelotti has given that winner character to the team that didn’t give up and levelled again (2-2) thanks to Kimmich and sent the match to the penalty shoot-out.

Bayern was better from the penalty spot as throughout the game. A superb Ulreich save two penalties and offered the German Supercup to his team. A trophy that stretches Carlo Ancelotti’s leyend on the benches. The Italian has 20 titles in his list of winners, a Bundesliga and two Supercups since he arrived at Bayern. Not only that, Ancelotti is the first manager, no German, to win twice the German Supercup in a row.