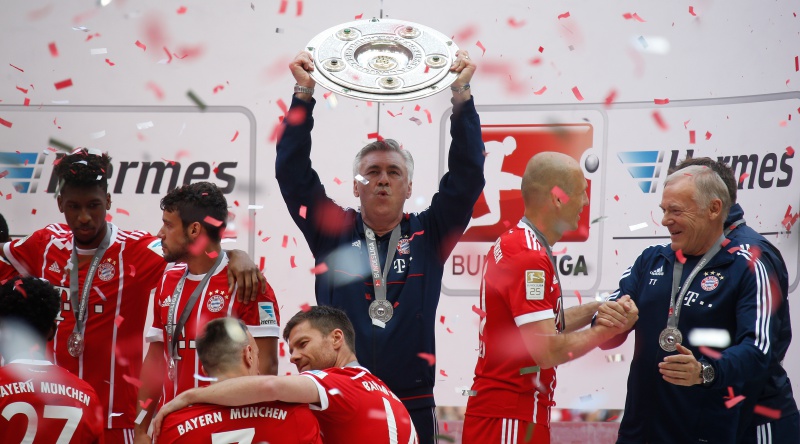 The Bundesliga was ending up and Bayern gave another thrashing. This time against Freiburg (4-1) thanks to goals by Robben, Vidal, Ribéry and Kimmich. Before the match came the farewells. Allianz Arena applauded Philipp Lahm, Tom Starke and Hermann Gerland the second coach, all of them received flowers and some awards from the President Karl-Heinz Rummenigge and the president of the Uli Hoeneß club.

Just after endind the match Allianz became a party. Players and crowd celebrated the title as they’ve won the 5th consecutive league. First the received the “Meisterschale” that give them credit as champions of the league and then the celebrated the title with beer. Carlo Ancelotti was completely bathed with beer as Bayern’s tradition has it and only had words of gretefulness: “This Bundesliga is for all of you, we will work for it to be the first of many. Thanks for all your support”.

The Italian coach ended up his first season in Germany with two titles: The Bundesliga and the German Supercup. Nevertheless, Ancelotti doesn’t want to stop there and needs more titles and to make history in Germany.