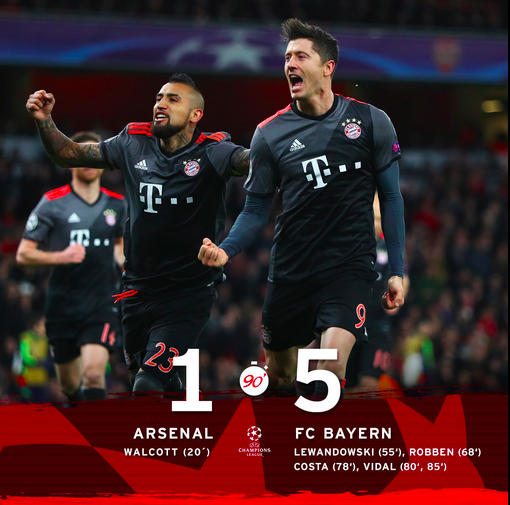 Bayern will play the quarter-finals of the Champions League. It was not a simple task as you may think looking at the score (1-5), Ancelotti’s team had to resist Arsenal´s reaction in London and take advantage of their chances to secure the qualification that had already on its pocket after the result in Munich. If Carlo Ancelotti had warned to avoid any distraction after the first leg´s 5-1, Bayern soon learned what the coach meant. A goal from Theo Walcott after 20 minutes was the warning that the Champions gives nothing away.

Arsene Wenger’s team played with intensity looking for any option for a comeback but the Gunners hopes were ditched when in the 55 minute Robert Lewandowski made the equaliser from the penalty spot. Arsenal with one man down after Laurent Koscielny´s red card lost the concentration and finally kneeled down. The goals from Arjen Robben, Douglas Costa and Arturo Vidal (2) sealed Bayern´s slot in quarters-finals one more edition and with an away victory for the first time since 2014. Ancelotti also reached his eleventh presence at the quarter-finals of the Champions, just one less than the mythical Sir Alex Ferguson.

Ancelotti, despite the joy of securing the qualification to the quarterfinals, did not hide the difficulties his team went through to win Arsenal: “The match was difficult until the penalty kick, we were very open and they created us problems. But we work hard and obtained a good result. I’m satisfied with the work of my players”.