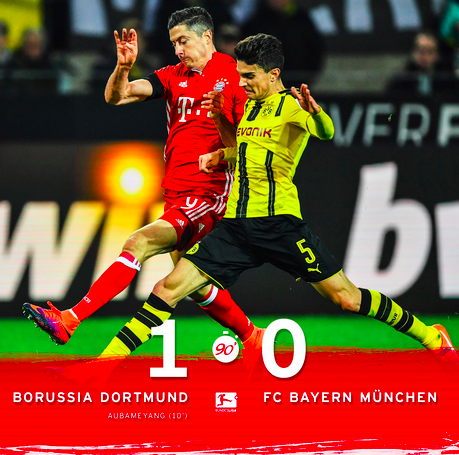 Eleven game-weeks after Bayern Munich were defeated for their first time this season in the Bundesliga. Ancelotti’s team, nevertheless, was defeated by little and against a tough rival as Borussia Dortmund, a team that got the three points from the Signal Iduna Park thanks to a goal from Pierre-Emerick Aubameyang on the 11′. It was the only goal of the match despite Bayern deserved more but Burki and the post (Xabi Alonso) , avoided the draw.

Carlo Ancelotti was the first to talk abou the defeat: ” We’ve lost an important match and we can’t be happy”, said the coach. Nevertheless, the manager had some positive words: “I’m satisfied with the performance of the team in general lines, obviously not with the score”. This defeat along with Leipzig’s win against Bayern Leverkusen leave Bayern on the second position of the Bundesliga.