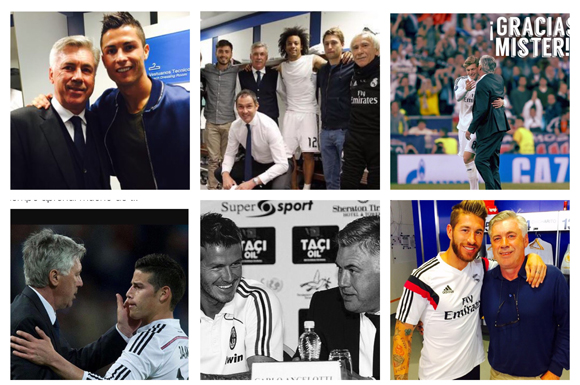 Carlo Ancelotti has said goodbye to Real Madrid, but the memories of his period at the club will remain for long, as seen by the reactions his farewell has provoked. In an ephemeral world like football, very few men can boast about leaving footprints where they step. Few of them get praised unanimously when they laeve. Carlo is one of them.

“A great coach and a fantastic person. I hope we can work together next season”. This is what Cristiano Ronaldo said on Twitter last Saturday. He posted a pic with the Italian coach. The Portuguese wasn’t the only one of the squad to praise the work of Ancelotti at Real Madrid. Twitter was the chosen path for the majority of messages: “Thanks for everything Míster. You are great. Always with you !, said Marcelo. The Brazilian left back had already spoken about Carlo Ancelotti after the match against Juventus: ” He is a great coach. If it were for me, th Míster would continue. He is a fantastic coach”.

Sergio Ramos, another Leader in the lockers, also praised him: “One of the best coaches I’ve ever had. Thanks for everything. A great one is leaving, we’ll remain friends”. Also Pepe said: “He’s been a great coach because he has united Madridism. We are going to be quite sad”. Toni Kroos : “Thanks Míster, It’s been a pleasure working with you, I hope the best for you in the future”. James Rodríguez: Thanks for everything Míster, I learnt much from you in very little time” and Benzema: Thanks for everything Míster and thank your staff as well”. Even the youngsters like Jesé Rodríguez said: “Thanks for your advice. You’ve proved to be a great coach, I hope the best for you. Lovely person” and Dani Carvajal: Thank you for two amazing years. I’ve learnt a lot with you and your staff, lots of luck!”. All of these players and more gave their farewells to Carlo.

The positive comments haven’t only come from Madrid players. Vicente del Bosque, Spanish coach, was clear a couple of days ago: ” Both in personal and professional ways he has been a man who has left his footprint on Spanish Football”. “We must thank him for the work he has done. He gave Real Madrid the 10th Champions League after so many years”, said Raúl González, another heavy weight player of Real Madrid. Even David Beckham who worked with him at Milan and PSG published a couple of photos with him on Instagram saying: “Il migliore”. The farewells, sad by nature, are better to handle with the love and acknowledgment of them who you leave behind.