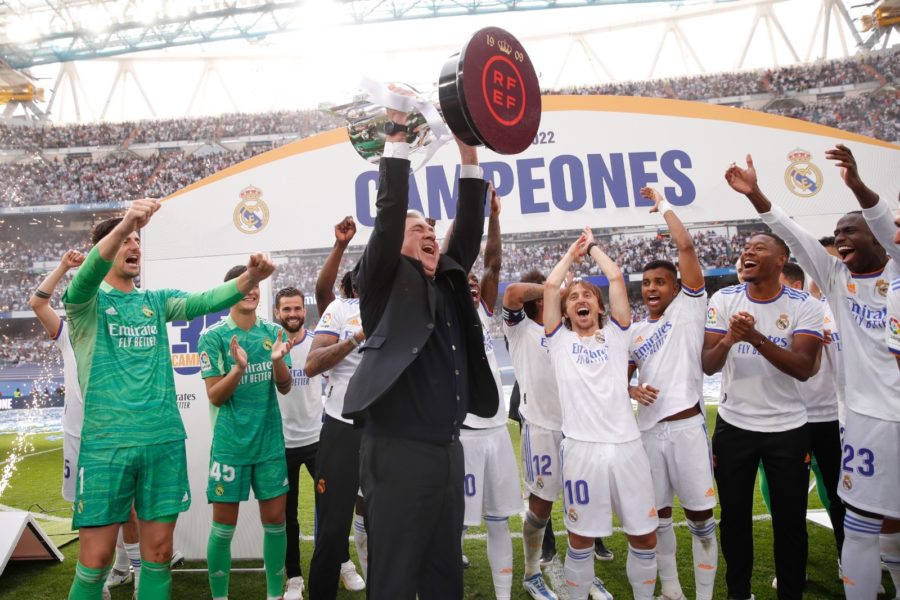 Real Madrid has been proclaimed champion of La Liga Santander by drawing / winning against Espanyol at the Santiago Bernabéu.

Carlo Ancelotti’s team, with four games still to play, has won its 35th league title, leading the competition with an iron fist. The white team reached the lead on gameweek 3 and did not let go of it again. A brilliant season, where Benzema and Vinicius have shone with their own light. In the case of the Frenchman, he has emerged as the true leader of this Real Madrid. With 25 goals in 29 games, he is the top scorer in the competition, also leading the assists table with 11. A true luxury that Carlo Ancelotti has clung to, who has known how to get the best out of the French star. In addition, he has had the invaluable help of Vini, who has had the best season since he arrived in the capital. The Brazilian, with 14 goals and 8 assists, has been the Frenchman’s best dance partner, both have adapted perfectly and have carried the merengue team to the league title.

But it wasn’t just them, the rest of the squad had an excellent season: Modric, Valverde, Kroos, Casemiro… they all rose to the occasion and knew how to respond when the coach needed it. Even the signings this season have been exceptional. Alaba has fitted in perfectly at Real Madrid. With his personality and football, he has become essential in Carlo’s ranks. The other signing, Camavinga, has been able to understand his role in this first year and has done it perfectly, earning everyone’s affection.

A special League for Carlo
But, without a doubt, who will remember this league the most will be Carlo Ancelotti. The Italian, far from wanting the leading role in the spotlight, has known how to work with the team to achieve his goals. And one of them was the League, which escaped him in his previous stage in the merengue team, but which he has managed to tie in this one. And it is not just any title, since it means a historical milestone. No one can boast of having won the trophy of the five major European leagues (Serie A, Premier League, Ligue 1, Bundesliga and Liga Santander) except him.

In addition, Carletto, has been fundamental in the evolution of this competition. He has been able to understand the season and, together with his coaching staff, they have brought out the best in the squad to reach the final stretch of the season in excellent condition. In difficult moments, he has read what the team needed to redirect the situation. Up to eight times the changes he has made have had significance on the scoreboard. And not only that, but the communion between coach and squad has been total.

The League, as is often said, is a reward for regularity and perseverance, and the white team has had a large dose of it. In addition, he is in a position to break a historical record: to obtain the title with the greatest advantage in history over the second (15 points), something that Barcelona boasts of until now. Snatching that achievement from him would undoubtedly be a magnificent finishing touch to a magnificent season.