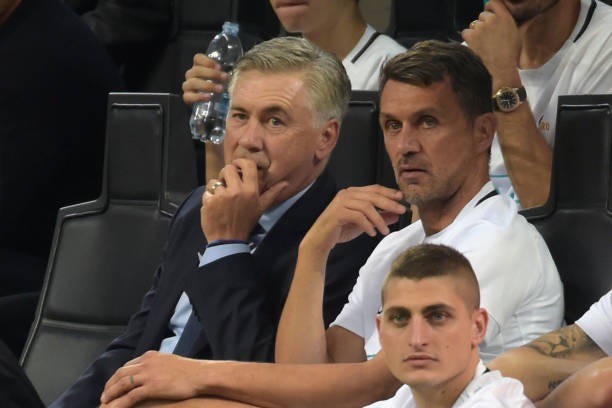 Carlo went to San Siro to give his personal farewell to the Italian myth that was one of the main pillars of his great Milan.

When anybody speaks about the Golden Era of AC Milan, it is impossible to avoid speaking of two legends: Carlo Ancelotti on the bench and Andrea Pirlo on the pitch. Two men that have been crucial to enlarge Milan’s legend. More than 8 seasons together, hundreds of matches and plenty of titles.

At Ancelotti’s orders, Pirlo won 8 trophies, although we must highlight the 2003 and 2007 Champions League, and the 2004 Serie A title. No other manager gave more titles to Pirlo than Carlo, and this is why when asked about him he says: Ancelotti? The coach with which I’ve spent more years and the most important of all. He is a fantastic person, just like a second father to me”, says Pirlo.

Surrounded by good friends for the farewell of a great player. Good luck Andrea! pic.twitter.com/cMGG43U5Bv

This is why, Ancelotti couldn’t miss this farewell. A farewell that counted with more than 50.000 persons in San Siro, and served to tribute one of the Italian football legends. To the meeting, many ex-team mates and even some famous rivals came just like Paolo Maldini, Gianluigi Buffon, Baggio, Seedorf, Inzaghi and Lampard.
Latest news
© Carlo Ancelotti
Back To Top
Este sitio web utiliza cookies / This website uses cookies / Questo sito Web utilizza i cookie / Diese Website verwendet Cookies OK+info