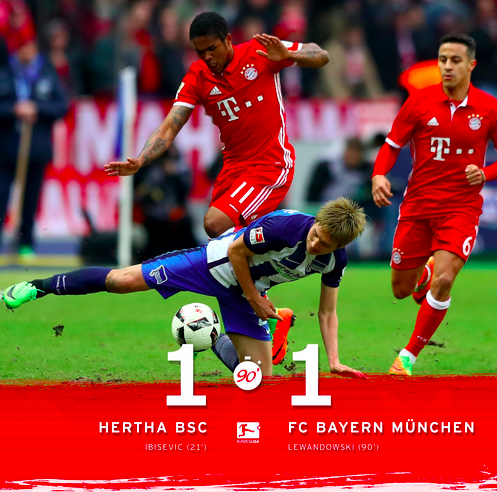 Bayern has turned its game in a matter of faith. They never give up. Their trip to Berlin to face Hertha has been the last example. Ancelotti’s men scored the equaliser in stoppage time (1-1) after a game that Hertha was poised to win. Nevertheless, once again, Robert Lewandoski came to the rescue in the last chance of the game. The goal avoided the defeat -Bayern has not lost a Bundesliga game since 19 Nov- and maintains Bayern on top and with no major trouble.

Ibisevic’s goal in the 20th minute came after a non-existent foul and troubled Bayern more than expected, also the conditions of the pitch did not help either. But their confidence made Ancelotti’s side to fight back and levelled a game that got off to a bad start.