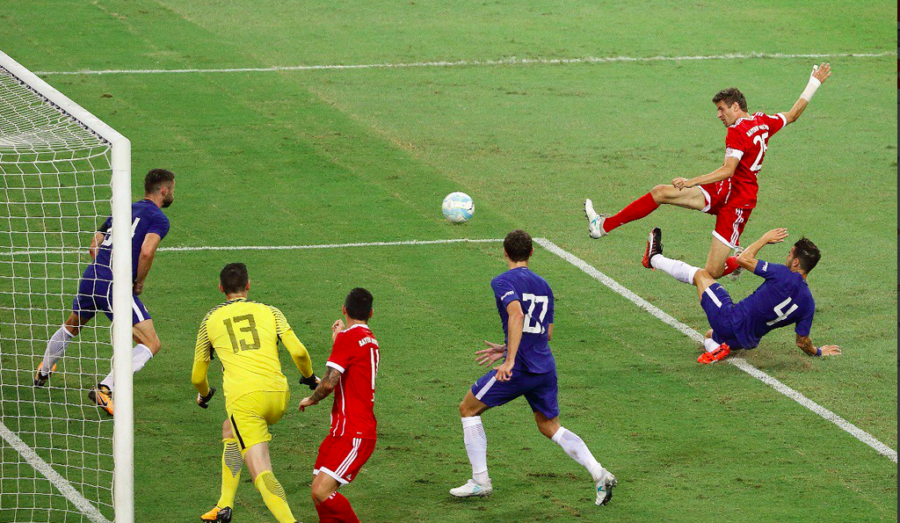 Bayern showed its best version in this International Champions Cup edition and not only for the result 3-2. Ancelotti’s team made an excellent first half of football and pace and showed the way to their best version. The 48522 fans who attended the game at the Singapore National Stadium enjoyed the goals from Rafinha (6′) and Thomas Müller (12′ and 26′) in a fantastic first 30 minutes outplaying the Premier League Champion with high pressure up the pitch and scoring all their three shots on target.
The second half started in the same way as the first, with Bayern controlling the game and Chelsea froze in their game. Just James Rodriguez lack of accuracy (he had up to four chances to stretch the lead) avoided Ancelotti’s men to finish the game. A circumstance that Conte’s side took advantage to disguise their awful game. The goals from Marcos Alonso and Batshuayi gave Chelsea the chance for a draw, however, it didn’t happen.
Carlo Ancelotti moderate in his evaluation, stressed his team performance: “I think we have made a great first half with intensity and fine shot. Then I think we were tired but
we manage to end the game.” The Italian coach knows there’s still work to do but we are in the right direction: “We have showed our best version against Chelsea but we are far from our best form. I’m pleased in any case.”
Latest news
© Carlo Ancelotti
Back To Top
Este sitio web utiliza cookies / This website uses cookies / Questo sito Web utilizza i cookie / Diese Website verwendet Cookies OK+info