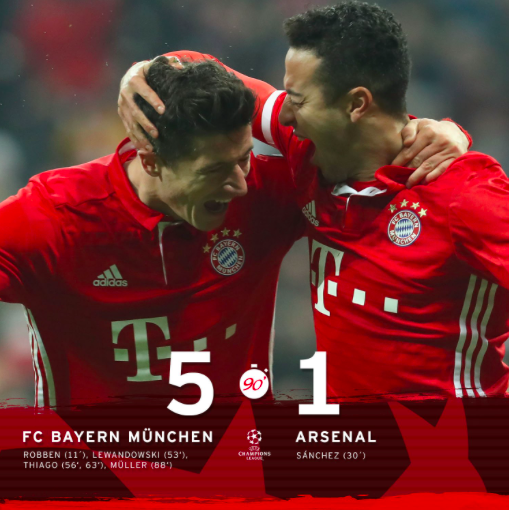 The Champions is a serious competition, both Bayern and Carlo Ancelotti knows it well and practically won the tie leaving the team on the brink of the quarter-finals of the competition, in what it was a perfect night for the Germans. The scored (5-1), for the Bavarian team, is a clear evidence of how important is the Champions for the Italian manager and his players.

They just conceded one goal after half an hour of play, Alexis Sánchez, after missing a penalty, beat Neuer in the rebound. It was the replay for Robben´s early goal but that was it for the gunners outplayed by Robert Lewandoski, who scored the second, and Thiago Alcantara, protagonist in this round as he beat twice Ospina. Müller scoring the final goal (88 ‘) rounded the score after coming from the bench to help his team to won the tie and secure the quarterfinals of the Champions League.

The superiority showed in Munich will require a final effort to secure the quarter-finals in London, where the 7 of March the second leg will be played. It will be then decided. Meanwhile, Ancelotti and his team could not hide the satisfaction of having started so well in the qualifying round: “It was a great night for us, I think we played a fantastic football, all my players were at a high level and that allows us to get a lot closer to the goal of being in the quarter-finals, but we have to wait, everything will be decided in London”.