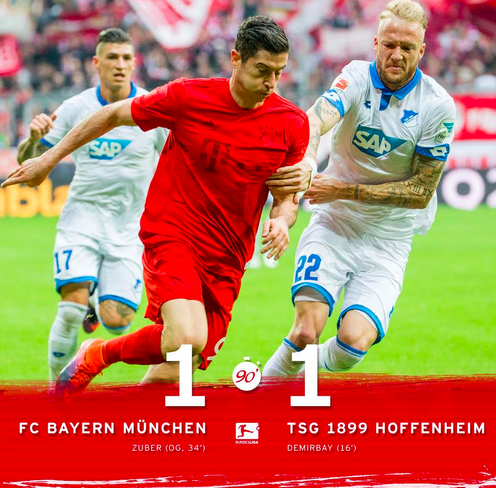 Bayern Munich saw how Hoffenheim left them without the three points on their visit to the Allianz Arena after a splendid second half of Ancelotti’s team, who couldn’t comeback because of the posts of Hummels and Müller’s shots. A draw, the second one this season at the Allianz, but Bayern Munich remain leaders of the Bundesliga.

Regarding to the match, Hoffenheim were a difficult team since the beginning and could score first thanks to Kerem Demirbay who did it on the 15th minute. Hoffenheim defended well and complicated Bayern’s control of the match. So much so that Ancelotti’s team needed an own goal from Steven Zuber to even the score.

The second half was completely on the side of the Germans but their strikers weren’t able to score the 2-1 that would have given the three points to Bayern, a team that deserved more. This is what Ancelotti said: “We’ve had problems on the first half. I think we deserved the win because of the second half. We knew it was going to be difficult and so it was”. Having said this, the Italian coach accepted the score: “We’ve created plenty of chances but this is football and sometimes you just don’t have luck”: