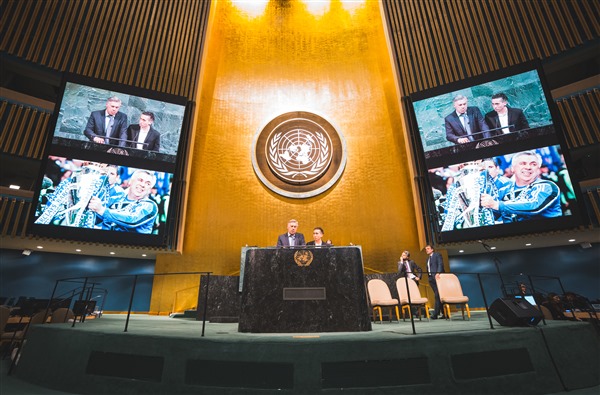 >Carlo Ancelotti won’t forget March 16, 2018. The Italian coach had the privilege of being a speaker at the General Assembly of the United Nations (New York) with his conference named “Talent and rules. The scenary and atmosphere got Ancelotti’s heart who said: “It was really emotional. Having the honor of speaking to such a universal crowd is fascinating. Some of the most important decisions are made here”.

The Italian coach, who is waiting for the moment to sit again on the benches of a new club, was one of the distinguished guests of the 7th CWMUN (Change World Model United Nations), one of the biggest student forums in the world. During 6 days, 3000 youngsters from 110 countries are debating about sustainable growth, simulating the job of the delegates of the UN. Ancelotti also had the honour of sharing his speech with important people such as ex US democrat president Bill Clinton, but also with great friends as Marco Tardelli.

After the event, Carlo Ancelotti maintained an informar meeting with Bill Clinton, who said was admirer of the Italian and didn’t want to leave without taking some pictures with him, without a doubt, one of the greatest coaches in the world. Carlo, said these words on his experience with Bill Clinton: “We’ve taken some pictures together because we wanted to have good memories of this day. We have shared anecdotes and curiosities… the truth is that it has been a pleasure to meet somebody who has made so much for Peace in the world and is remembered as one of the best presidents of the United States of America.