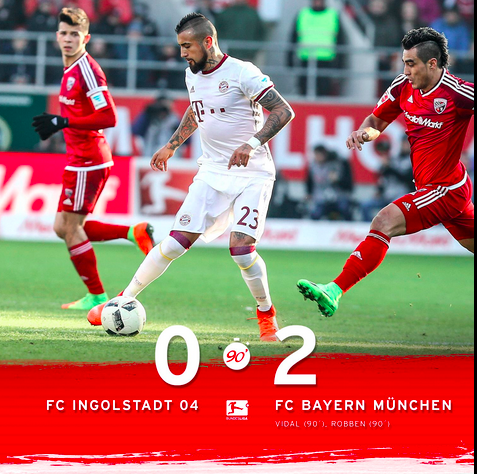 There are wins that mark a tournament. This Saturday’s win to Ingolstadt is one of them. Bayern had to wait until the 90th minute to score against the second to last team on the table, but Robben scored the second one on the 91′ to settle the final 0-2. But then it was also a meaningful victory as their three immediate rivals (Leipzig, Eintracht and Dortmund) lost their corresponding matches. A great play from Ancelotti’s team that remain leaders and at 7 points from the second one, Leipzig, at 14 points from the third (Eintracht) and at 15 points of difference to Dortmund.

Ancelotti’s team, in any case, proved again their unrepentant character and their determination for winning. This Bayern maintains the faith in what they do until the last whistle. It happened against Friburg when LEwandowski scored on the 91 and it happened again today against Ingodstadt, this time with Arturo Vidal as a scorer. It’s all a matter of attitude and faith and this Bayern is leader on these aspects as well.

Ancelotti, who celebrated the win with his pupils on the pitch didn’t hide how much they suffered to win: “It’s been a very difficult match, a tough fight, but we’ve got the three points because we’ve always believed in the victory. We need to keeep on working like this, and this attitude makes us believe in our own possibilities”: