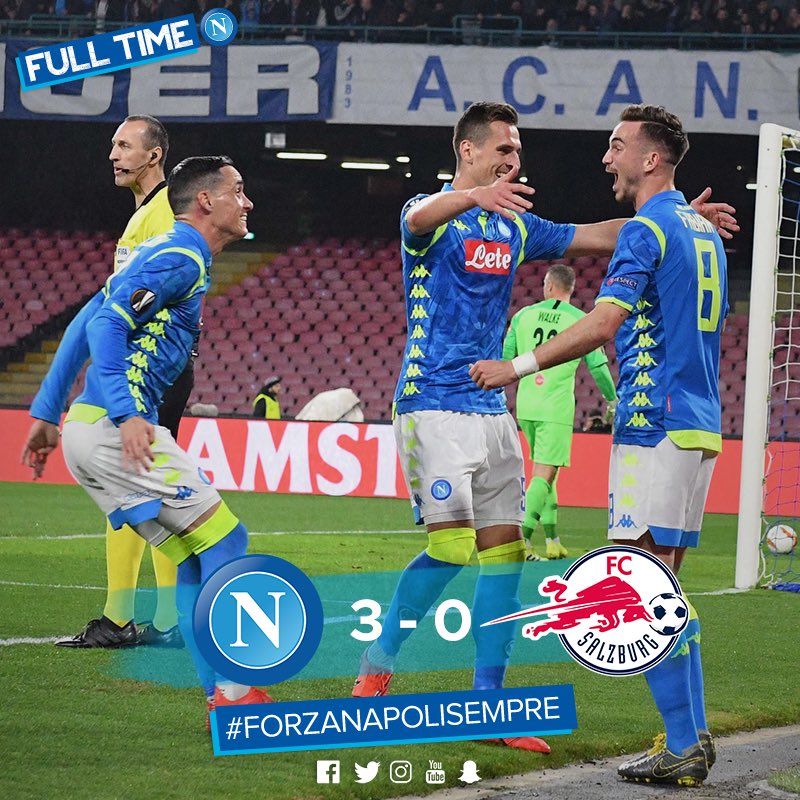 The Europa League is still a talismanic competition for Carlo Ancelotti, who has won all the three matches played in this tournament. The last victim of the Italian coach was Red Bull Salzburg, which lost 3-0 in their visit to San Paolo. The Neapolitans dominated the clash from start to finish and gave no option to their rival.

In the first visit to Naples by an Austrian team, the transalpine team managed to get the tie on track for the quarter-finals of the Europa League. In a game that was close to perfection, Ancelotti’s players took advantage thanks to goals from Milik, Fabián and Onguene with an own goal.
After beating FC Zurich in both legs of the previous round, Ancelotti continues with some excellent numbers. Eight goals in his favor and only one conceded in three games played.

After last weekend´s disappointment where they lost unfairly to Juventus, in Naples they have Milik back in the squad, who must be their great goalscorer, and have seen how Fabian is also capable of scoring great goals. The Pole took advantage of a fantastic play with Mertens and the Spaniard did not miss the chance and netted the second for his team with a powerful shot from the edge of the box.  Onguana rounded the score with an goal own goal.

Next week Naples will travel to Salzburg with a clear advantage of three goals that put them closer to the quarter-finals of a competition that is increasingly important in European football.

Good result and excellent work from my team. pic.twitter.com/mBkQoHLeIw