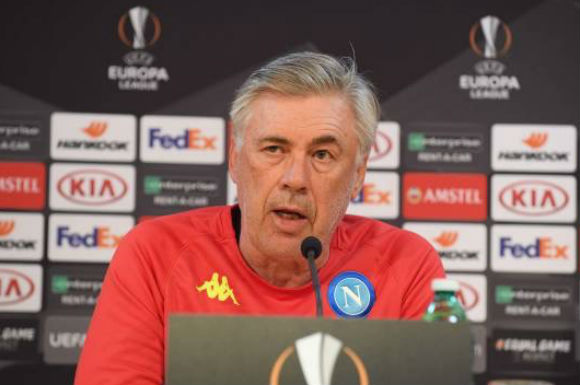 With the disappointed defeat against Juventus already forgotten and the lesson learnt, Naples has a new opportunity to give a joy to its fans. The Europa League returns to San Paolo. The continental competition has fostered a dream in the Neapolitan team and Red Bull Salzburg will be the next rival.

Seeing the winners of the latest editions, Ancelotti highlighted in press conference prior to the game that “The Europa League is gaining importance”, adding by focusing on his team that “we need to reap the fruits of all the football we are producing”.

With three Champions Leagues on his record, Carlo does not know what it is to win this competition as he has debuted in it this season and therefore, both he and the staff are excited to achieve something important.

Aware of Salzburg that is very strong in attack, Carlo emphasizes that “the players are well physically and psychologically”, adding that “we must exploit the field factor intelligently. We must lead the game ourselves because we play against a rival with a very vertical football. “

Finally, the Italian coach showed his full confidence in Insigne after missing a penalty against Juventus.  “Penalties are fail by those who take them, he will continue to do so.”

Thus, on Thursday at 9:00 p.m., Naples will host Red Bull Salzburg at San Paolo in the first leg of the last 16 of the Europa League. The Serie A isn’t that close anymore for the Neapolitans, but the club dreams of achieving something nice in Europe.

🎙 @MrAncelotti: "I firmly believe that the return leg will be the decisive one – tomorrow's game is a step along the path to advancing"
⚽ #NapoliSalzburg
🏆 @EuropaLeague
💙 #ForzaNapoliSempre pic.twitter.com/mqVG0hB6G4