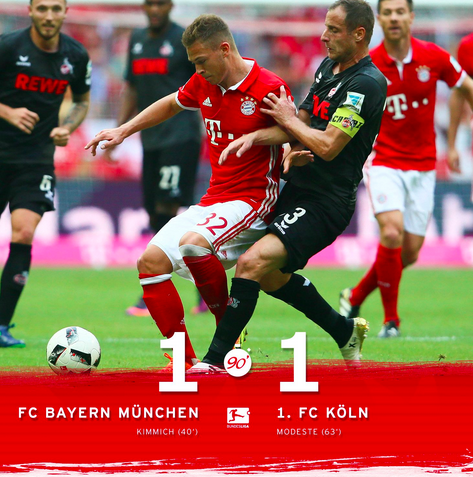 Cologne ended Bayern’s excellent run in the Bundesliga at the Allianz Arena. This time, Ancelotti’s team could not break the tie (1-1) in tight game against a good Cologne that proved why they are the surprise of the league.

Kimmich’s goal awarded Bayern’s persistence just before the break, a lead Cologne soon neutralized in the second half as Anthony Modeste beat Neuer with a low shot. There were many chances in both goals til the end but no-one could break the tie and grab the three points.

Carlo Ancelotti stressed the good first half of his team and admitted the difficulties Cologne put them into: “We started well and had the control of the game but in the second half Cologne improved.” Although the Italian believes they deserved more: “We could have won by the chances we had but they also had theirs”. Finally, Carlo send a reassuring message: “We could be disappointed but not worried”.