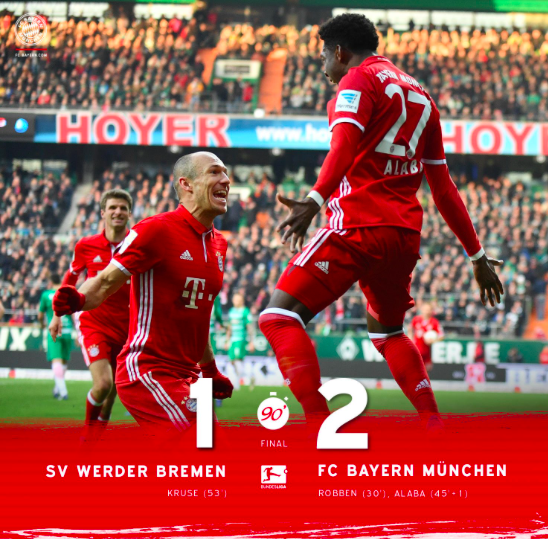 The leaders are not budging. Bayern kicked off the second half of the season with a narrow win 2-1 win away at Werder Bremen. It was a match in which Ancelotti’s men produced their best performance over 90 minutes. Robben’s strike after half an hour of play and David Alaba’s goal just before the break were enough for the Bavarian side in a match in which Bremen only showed signs of making things difficult after Kruse’s 53rd-minute goal. Nevertheless, Bremen did not produce a clear chance to level the encounter.

Carlo Ancelotti wanted to highlight the good work of his team in a match which was anything but simple. “This match against Bremen is an example of the difficulties that there are during a season. We had a difficult match today, but we knew how to play our trump cards and I think that we deserved the win.” This victory stretched Bayern’s run of consecutive Bundesliga wins to seven matches, a run that is extended to eight fixtures if the Champions League win against Atlético de Madrid is included. They have now beaten Bremen in each of their last 13 league meetings.